Brazilian singer Astrud Gilberto (March 30, 1940), referred to as the "Queen of Bossa Nova", established herself as a Jazz and pop singer in 1964 with her Grammy Award winning, influential recording of "Girl From Ipanema" with her then husband João Gilberto (the father of Bossa Nova) and Stan Getz. "Girl From Ipanema" (Garota de Ipanema) was composed by late pianist/guitarist and songwriter Antonio Carlos Jobim.

In 1992 she received the Latin Jazz USA Award for Lifetime Achievement for her outstanding contribution to Latin Jazz music, and was inducted into the International Latin Music Hall of Fame in 2002. In 1995, after releasing an album in tribute to Jobim, in front of a sold out crowd, she's credited as being the first Jazz artist to perform at the House of Blues in Los Angeles, which was once a venue known to only feature Blues and Rock artists exclusively. 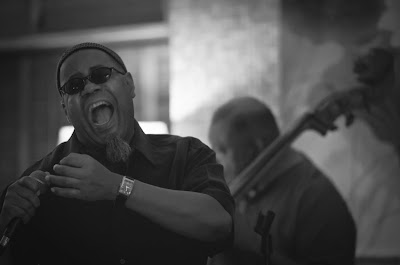 Widely considered a virtuoso for his vocal ability, Dwight Trible (March 29th) encompasses the skills to improvise where many Jazz singers don't. Gaining years of experience with the likes of Oscar Brown Jr., Kenny Burrell, Patrice Rushen, DJ Rogers, and a host of other notables in music, Trible also spearheads his own Dwight Trible Ensemble, as well as the vocalist with the Pharaoh Sanders Quartet and is also the vocal director for the Horace Tapscott Pan Afrikan Peoples’ Arkestra.